Ten Years after Fukushima: Commemoration and Lessons for the Future 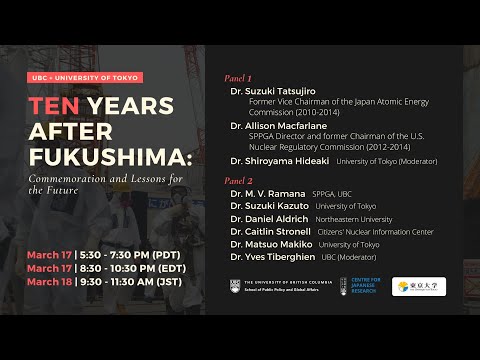 As we commemorate the 10th anniversary of the Fukushima Daiichi nuclear power plant disaster in 2011, the University of Tokyo and UBC invite you to our two-part online panel discussions on lessons from Fukushima.

This event is jointly organized and sponsored by:

The University of Tokyo, Graduate School of Public Policy, Institute for Future Initiatives, and

The University of British Columbia, School of Public Policy and Global Affairs, Centre for Japanese Research

The event will be hosted online via Zoom. Participants will receive the Zoom link to access the event 24 hours prior to the event via email. Please register.

If you do not receive the access link 24 hours prior to the event, please email Saya Soma at sayasoma@mail.ubc.ca.

The View from Regulators and Leaders: lessons from Fukushima for Japan and the world with respect to nuclear energy and systemic risk management

Dr. Aldrich is Director of the Security and Resilience Studies Program and Professor in Political Science and Public Policy. Prior to coming to Northeastern University he was on the faculty at Purdue University (2008-2015). His work focuses on two main themes: the role of networks in disasters and crises and the interaction between civil society and the state. His award winning books include Black Wave: How Connections and Governance Shaped Recovery from Japan’s 3/11 Disasters and Building Resilience: Social Capital in Post-Disaster Recovery. His research has been published in Scientific Reports, Journal of Environmental Management, Natural Hazards, WIREs Climate Change, and Social Science and Medicine, among other journals. He has received extensive coverage in the media, including The New York Times, NPR, The Washington Post, WIRED, Salon, and The Wall Street Journal. Professor Aldrich graduated from the University of North Carolina at Chapel Hill with a B.A. in East Asian Studies in 1996. After receiving an MA from the University of California at Berkeley in 1998, he was awarded the PhD in Government from Harvard University in 2005. He Tweets at @danielpaldrich.

Dr. Allison M. Macfarlane is currently Professor and Director of the School of Public Policy and Global Affairs within the Faculty of Arts at UBC. Dr. Macfarlane has held both academic and government positions in the field of energy and environmental policy, especially nuclear policy. Most recently, she directed the Institute for International Science and Technology Policy at the George Washington University. She recently held a fellowship at the Wilson International Center for Scholars in Washington, DC and was Fulbright Distinguished Chair in Applied Public Policy at Flinders University and Carnegie Mellon Adelaide in Australia.

Makiko Matsuo is currently serving as Project Assistant Professor at the Graduate School of Public Policy, the University of Tokyo, where she engages in teaching and research in the Science Technology and Innovation Governance Education and Research Program (STIG). Her research area covers various interdisciplinary approaches such as risk studies, technology assessment, and consideration of ELSI (Ethical, Legal, and Social Implications) in order to address interface governance issues between science and politics.

M.V. Ramana is the Simons Chair in Disarmament, Global and Human Security and Director of the Liu Institute for Global Issues at the School of Public Policy and Global Affairs, and, during 2020-21, a Scholar at the Peter Wall Institute for Advanced Studies, all at the University of British Columbia in Vancouver, Canada.  He is the author of The Power of Promise: Examining Nuclear Energy in India (Penguin Books, 2012) and co-editor of Prisoners of the Nuclear Dream (Orient Longman, 2003). Ramana is a member of the International Panel on Fissile Materials, the Canadian Pugwash Group, the International Nuclear Risk Assessment Group, and the team that produces the annual World Nuclear Industry Status Report. He is the recipient of a Guggenheim Fellowship and a Leo Szilard Award from the American Physical Society.

Caitlin Stronell completed her Ph.D. in political studies from Jawaharlal Nehru University, New Delhi in 2016. Her research focused on the Indian anti-nuclear movement. She works as a researcher with the Citizens’ Nuclear Information Center (CNIC), an NPO based in Tokyo. She is editor of CNIC’s English newsletter and her research at CNIC focuses on Japan’s nuclear fuel cycle policy and plutonium stockpile.  She is a visiting professor at Musashino University, where she teaches Environmental English in the Engineering Faculty and she is a visiting researcher at Gifu Women’s University, Center for South Asian Studies.

Kazuto Suzuki is Professor of Science and Technology Policy at the Graduate School of Public Policy at the University of Tokyo, Japan.  He graduated Department of International Relations, Ritsumeikan University, and received Ph.D. from Sussex European Institute, University of Sussex, England.  He was the Associate Professor at the University of Tsukuba from 2000 to 2008 and served as Professor of International Politics at Hokkaido University until 2020.  He also served as an expert in the Panel of Experts for Iranian Sanction Committee under the United Nations Security Council from 2013 to July 2015.  His research focuses on the conjunction of science/technology and international relations; subjects including space policy, non-proliferation, export control and sanctions.

Tatsujiro Suzuki is a Vice Director, Professor of Research Center for Nuclear Weapons Abolition at Nagasaki University (RECNA), Japan. Before joining RECNA, he was a Vice Chairman of the Japan Atomic Energy Commission (JAEC) of the Cabinet Office from January 2010 to March 2014.  He is now a member of the Advisory Board of Parliament’s Special Committee on Nuclear Energy since June 2017. He is also a Council Member of Pugwash Conferences on Science and World Affairs (2007-09 and from 2014~). Dr. Suzuki has a PhD in nuclear engineering from Tokyo University (1988).

Yves Tiberghien (Ph.D. Stanford University, 2002; Harvard Academy Scholar 2006; Fulbright Scholar 1996) is a Professor of Political Science, Director Emeritus of the Institute of Asian Research, and Co-Director of the Center for Japanese Research at the University of British Columbia (UBC) in Vancouver, Canada.

Yves is Distinguished Fellow at the Asia-Pacific Foundation of Canada and a Senior Fellow at the University of Alberta’s China Institute. He is an International Steering Committee Member at Pacific Trade and Development Conference (PAFTAD). He is a visiting professor at Tokyo University and at Sciences Po Paris. He co-founded the Vision 20 initiative in 2015.

Yves’ research specializes in comparative political economy and global economic and environmental governance, with an empirical focus on Japan, China, Korea, and Europe. His latest book is The East Asian Covid-19 Paradox (forthcoming 2021, Element Series, Cambridge University Press). In 2020, he edited an online collection of papers on Japan’s leadership in the Liberal International Order.