Japan and Korea in Southeast Asia: Roles, Influences, and Interests 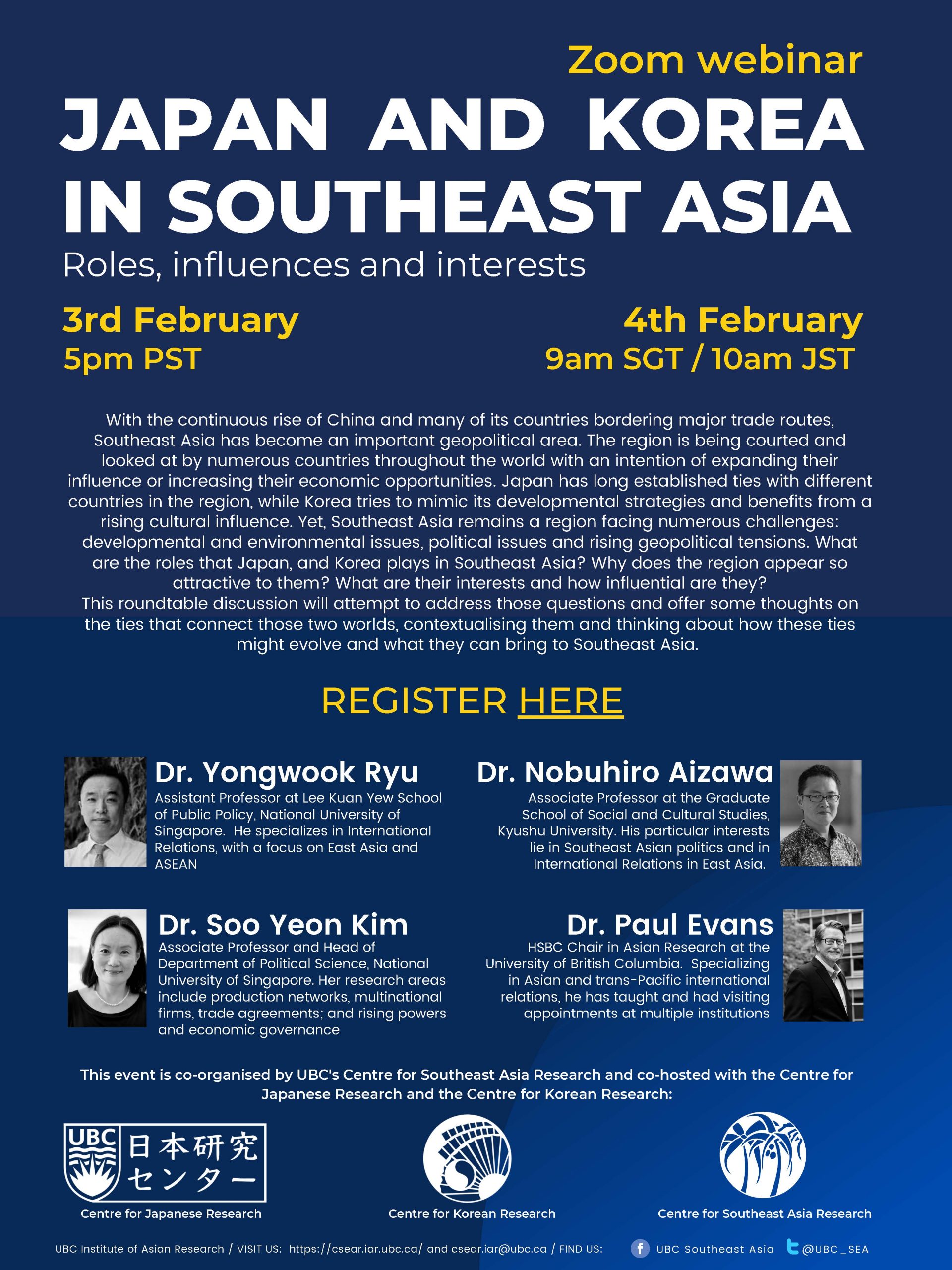 Japan and Korea in Southeast Asia: Roles, influences, and interests.

With the continuous rise of China and many of its countries bordering major trade routes, Southeast Asia has become an important geopolitical area. The region is being courted and look at by numerous countries throughout the world with an intention of expanding their influence or increasing their economic opportunities. Japan has long established ties with different countries in the region, while Korea tries to mimic its developmental strategies and benefit from a rising cultural influence. Yet, Southeast Asia remains a region facing numerous challenges: developmental and environmental issues, political issues and rising geopolitical tensions. What are the roles that Japan, and Korea plays in Southeast Asia? Why does the region appear so attractive to them? What are their interests and how influential are they?

This roundtable discussion will attempt to address those questions and offer some thoughts on the ties that connect those two worlds, contextualising them and thinking about how these ties might evolve and what they can bring to Southeast Asia.

Dr. Nobuhiro Aizawa is Associate Professor at the Graduate School of Social and Cultural Studies, Kyushu University. His particular interests lie in Southeast Asian politics (Indonesia and Thailand) and in International Relations in East Asia. He currently works on a project on 1. the Geopolitics of digital authoritarianism together with METI(2021-2023), with a particular interest on the International politics of digital infrastructure and 2. The emerging US-Asian elite network on the rise of Asian digital economy. He has been a Wilson Center Japan Scholar (2019-20), a Visiting Scholar at Thammasat University (2015), Chulalongkorn University (2010-11) and Cornell University (2009-10). He is a former Research Associate at the Institution of Development Economies-JETRO, National Graduate Institute of Policy Studies in Tokyo.

Dr. Yongwook Ryu is an Assistant Professor at Lee Kuan Yew School of Public Policy, National University of Singapore.  He specializes in International Relations, with a focus on East Asia.  His research interests include foreign policies of China, Japan, Korea and ASEAN as well as broad regional and global issues.  His current research examines (1) the effect of national identity on foreign policy and international relations, (2) tech competition between the US and China, (3) political crisis in Myanmar and ASEAN, and (4) Korea-Japan relationship.  Yongwook received his Ph.D. from the Department of Government, Harvard University, and previously taught at the Australian National University.

Dr. Paul Evans is the HSBC Chair in Asian Research at the University of British Columbia.  Specializing in Asian and trans-Pacific international relations, he has taught and had visiting appointments at multiple institutions in Canada, the United States, Australia, and Asia.  He served as Co-CEO of the Asia Pacific Foundation of Canada in 2005-08 and has led research institutes and various partnership and dialogue activities with think tanks and universities around the region.  He currently acts as a Canadian representative on the ASEAN Regional Forum’s Experts and Eminent Person Group.