Japan’s Leadership in the Liberal International Order: Impact and Policy Opportunities for Partners 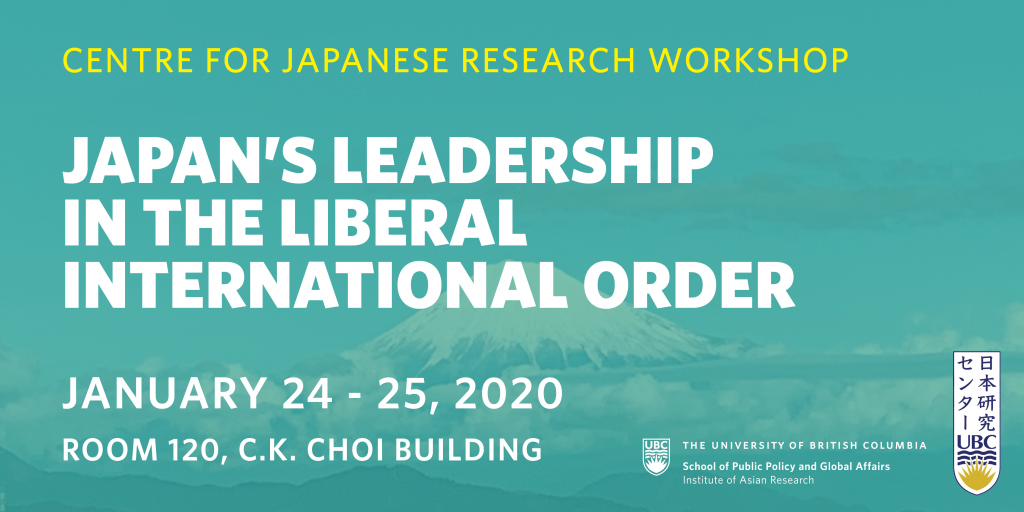 On January 24-25 2020, the Centre for Japanese Research hosted a two-day international conference titled “Japan’s Leadership in the Liberal International Order.” The conference was hosted by the UBC Centre for Japanese Research (CJR) at the Institute of Asian Research, led by CJR Co-Director, Yves Tiberghien. Since 2016, Japan has shown remarkable leadership in trade, global finance and economics, and the environment, and has helped to stabilize relations with China, and initiated strategic engagement with India and ASEAN. The workshop explored the history of Japanese global leadership, its significance to current global trade leadership, and the potential for Japan-Canada relations, such as over reform of the World Trade Organization. The workshop included keynote remarks by His Excellency Ambassador Kawamura Yasuhisa, remarks by SPPGA Honorary Professor Joseph Caron (former Ambassador to Japan), and was conducted with academics from other leading universities and think tanks in Canada, Japan, and the United States.

With the support and collaboration from the authors and our joint partners, the revised papers have been published on the SPPGA website.

View Event Program
Since 2016, Japan has shown remarkable leadership on several dimensions of global and regional economic governance, including trade governance (CPTPP, EU-Japan FTA, RCEP, Japan-US trade agreement, WTO reforms), economic and data governance (Osaka G20 in 2019, including Osaka track on data with trust, quality infrastructure, global finance), regional rules-based order (Free and Open Indo Pacific, stabilized relations with China, strategic engagement with India and ASEAN), and environmental governance (oceans, climate).
The workshop focused on the following themes:
· How significant is Japan’s new leadership in global trade leadership from CPTPP to EU-Japan FTA, US-Japan bilateral management, WTO reforms, stabilization with China, and role in RCEP?
· What is driving this change?
· Do we see a larger pattern of Japan’s leadership in the Global Liberal Order, including its G20 chairmanship, statements on climate change (Eg Davos speech)?
· Where has Japan’s leadership been limited, and what are the constraints?
· What implications and potential for Japan-Canada relations (including over WTO reform)?

10:50am- 1230pm  PANEL 1:  THE STRATEGIC PICTURE – Explaining the Burst in Japanese Leadership in Support of the Rules-Based International Order

“Time to reconsider or Go ahead? : Corporate Governance Reforms in Japan under Abenomics”