[Nov/10] How Green Was My night Soil: Thinking with Excrement About Nineteenth-Century Japan 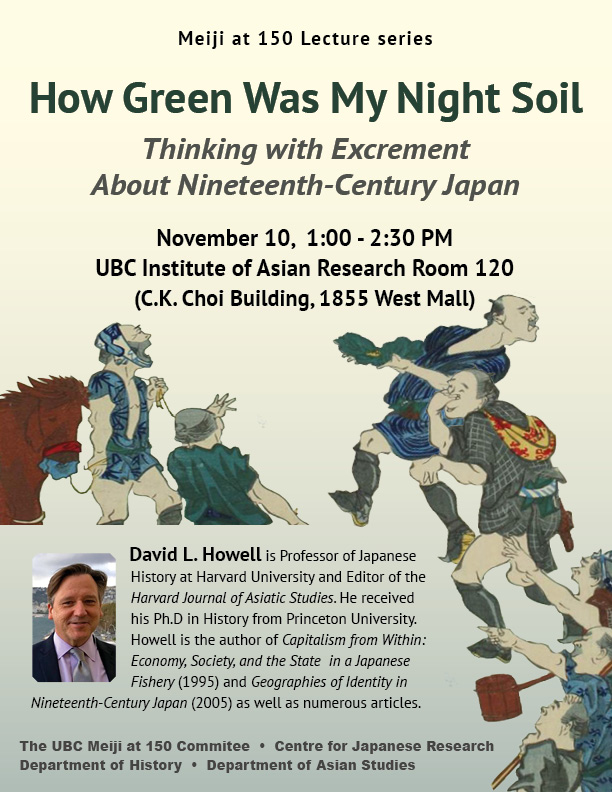 Excrement was a hot commodity in the cities of nineteenth-century Japan. The widespread use of night soil as an organic fertilizer meant that residents of cities such as Tokyo and Osaka could sell their waste rather than simply dispose of it. Thanks to this trade, pre–twentieth-century cities Japanese cities enjoy a reputation as having been remarkably green spaces in which residents lived in salubrious harmony with nature. In this presentation, I will argue that the night-soil economy offers a novel way to situate late Tokugawa and early Meiji Japan into the broader history of the nineteenth-century world, while at the same time challenging the tendency to essentialize the “greenness” of early modern Japanese cities.

David L. Howell is Professor of Japanese History at Harvard University and Editor of the Harvard Journal of Asiatic Studies. He received his B.A. from the University of Hawai’i at Hilo and Ph.D. in History from Princeton University. He taught at the University of Texas at Austin and Princeton before joining the Harvard faculty in 2010. Howell is the author of Capitalism from Within: Economy, Society, and the State in a Japanese Fishery (1995) and Geographies of Identity in Nineteenth-Century Japan (2005) as well as numerous articles.

This event is jointly sponsored by the UBC Meiji at 150 Committee, Centre for Japanese Research, Department of History and Department of Asian Studies.