[Nov/24] The Emperor and His Poetic Subjects: The Utakai Hajime Ceremony and Meiji Japan 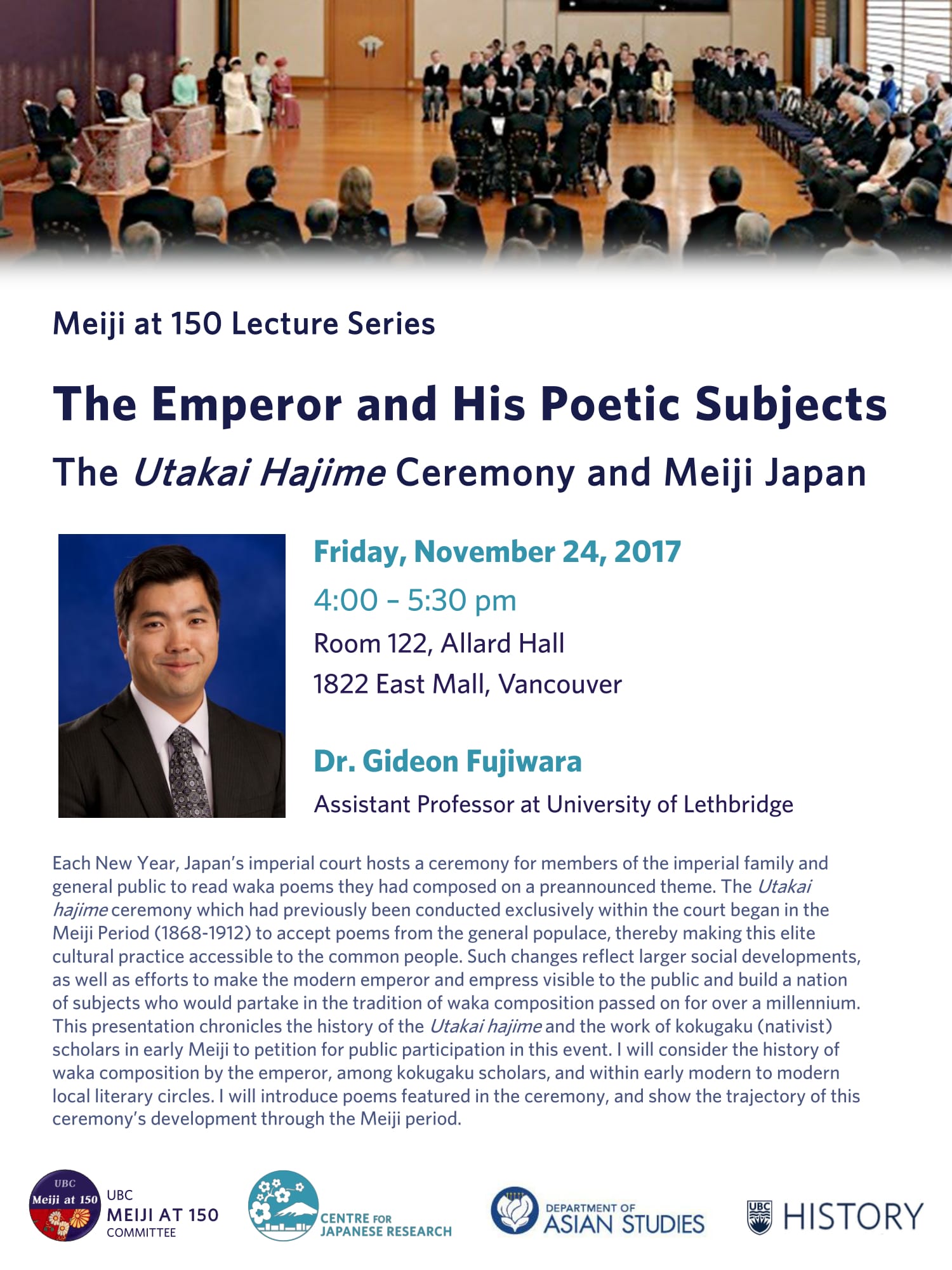 “The Emperor and His Poetic Subjects: The Utakai Hajime Ceremony and Meiji Japan”

Each New Year, Japan’s imperial court hosts a ceremony for members of the imperial family and general public to read waka poems they had composed on a preannounced theme. The Utakai hajime ceremony which had previously been conducted exclusively within the court began in the Meiji Period (1868-1912) to accept poems from the general populace, thereby making this elite cultural practice accessible to the common people. Such changes reflect larger social developments, as well as efforts to make the modern emperor and empress visible to the public and build a nation of subjects who would partake in the tradition of waka composition passed on for over a millennium. This presentation chronicles the history of the Utakai hajime and the work of kokugaku (nativist) scholars in early Meiji to petition for public participation in this event. I will consider the history of waka composition by the emperor, among kokugaku scholars, and within early modern to modern local literary circles. I will introduce poems featured in the ceremony, and show the trajectory of this ceremony’s development through the Meiji period.

Gideon Fujiwara is an assistant professor in the History Department and Coordinator of Asian Studies at the University of Lethbridge. He teaches courses on the histories of the world, East Asia, China, Japan, Nations and Nationalism, and Modernity, as well as Asian Studies. Recent publications include: “Channeling the Undercurrents: Fūsetsudome, Information Access, and National Political Awareness in Nineteenth-Century Japan,” The Journal of Japanese Studies (summer 2017 issue) and “Rebirth of a Hirata School Nativist: Tsuruya Ariyo and His Kaganabe Journal,” Values, Identity and Equality in Eighteenth and Nineteenth-Century Japan. Eds. Peter Nosco, James Ketelaar, and Yasunori Kojima (Leiden: Brill, 2015). Gideon is completing a book on ethnography, kokugaku, and the experience of community in nineteenth-century Japan. Current projects include a history of Tohoku region and studies of waka composition from Meiji times. Gideon holds a PhD in Asian Studies from UBC and an MA in Japanese Intellectual History from Tohoku University.