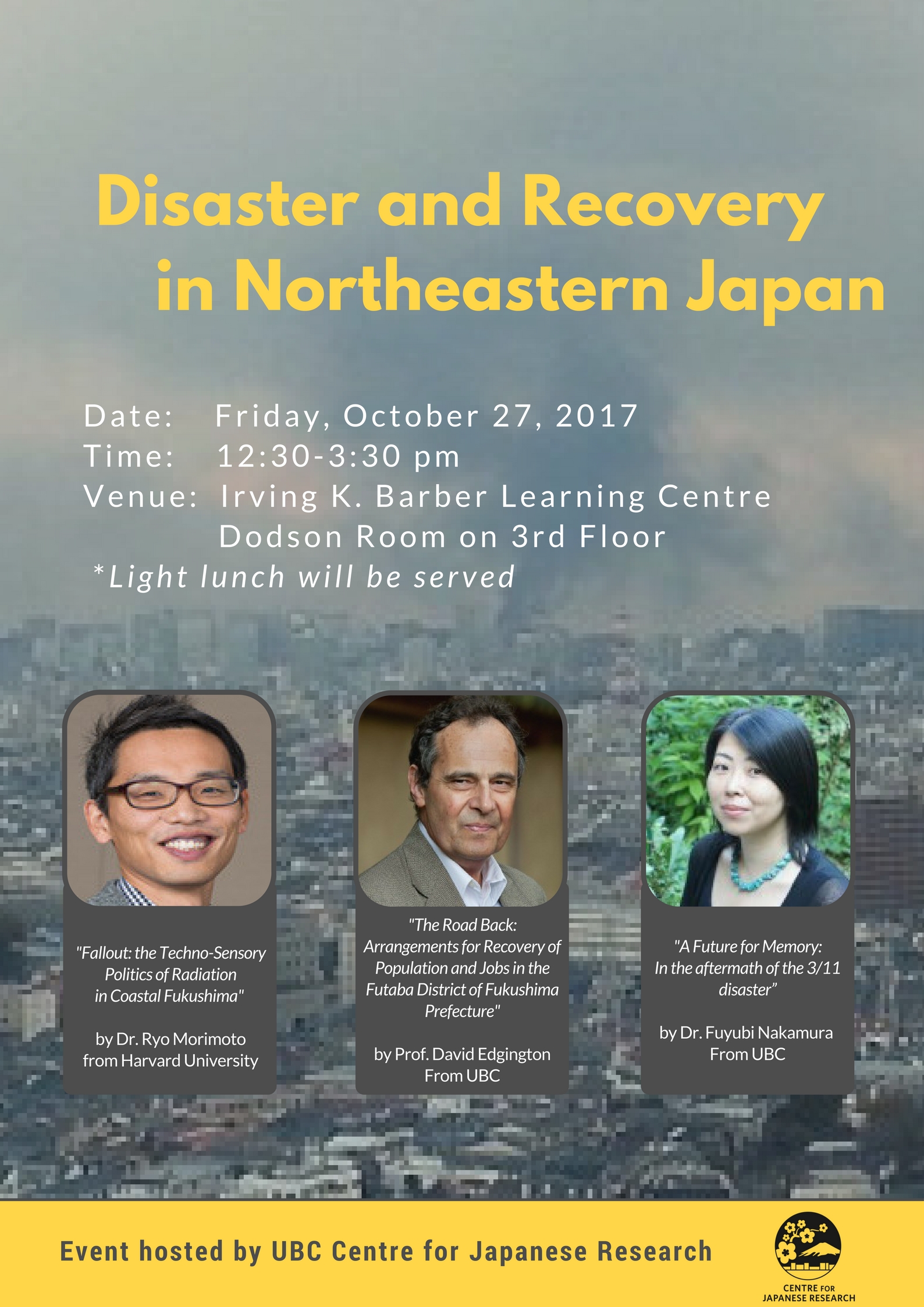 Based on 30 months of ethnographic fieldwork conducted between 2013-2017 in Minami-soma city, this talk examines how residents’ lives in post-nuclear disaster coastal Fukushima have been impacted by natural and technological disaster and its associated techno-sensory politics of nuclear “things.” By techno-sensory politics, I mean the process through which the uses and applications of technologies intended to make otherwise in-sensible experiences apprehensible to the human senses foreground certain representations of and knowledge regarding insensible things while downplaying others in a way that is non-neutral. Under a techno-sensory regime that privileges expert, scientific quantifications of radiation, local residents constantly struggle to validate their subjective experience of exposure, which not only has to be objectively measurable and individually knowable, but also has to be socially, politically and legally acknowledged through economic and other forms of compensations.

“Fallout: the Techno-Sensory Politics of Radiation in Coastal Fukushima.”  by Dr. Ryo Morimoto from Harvard University

Dr. Ryo Morimoto received his Ph.D. in Anthropology from Brandeis University in Spring 2016. Since 2011, he has been studying the Great East Japan Earthquake, Tsunami and Nuclear Accident (3.11) and has published articles on various topics such as anthropology and disaster, culture and sudden change, memory and material objects, and the selective remembrance of the nuclear in Japan. He was previously a visiting scholar of the Institute of Comparative Culture at Sophia University and the International Research Institute of Disaster Sciences at Tohoku University. Since June 2014, he has been Project Manager for the Japan Disasters Digital Archive (JDA) at the Reischauer Institute.

“The Road Back: Arrangements for Recovery of Population and Jobs in the Futaba District of Fukushima Prefecture” by Prof. David Edgington from UBC

Prof. David Edgington’s current research focuses on aspects of economic geography in the Pacific Rim, including Japanese trade and investment patterns in China. He holds a SSHRC grant to examine aspects of the recovery of coastal Tohoku, northern Japan after the 2011 East Japan Earthquake and Tsunami; and he also conducts research on urban and regional change in Japan.

“A Future for Memory: In the aftermath of the 3/11 disaster” from Dr. Fuyubi Nakamura from UBC

Fuyubi Nakamura (M.Sc., D.Phil. Oxford, 2006) is a socio-cultural anthropologist and curator, and joined the UBC Museum of Anthropology (MOA) in April 2014. She specializes in the anthropology of art, museum studies and material and visual cultures with special interest in Japan and its diasporas, India, Tibet and contemporary art. Fuyubi has taught in the graduate schools at the University of Oxford, the Australian National University and University of Tokyo.

Her investigation into the production and consumption of Japanese calligraphy as a researcher and curator has developed over multiple global locations. Her recent research investigates the world of Japanese calligraphy in Brazil, and Argentina where she was a guest curator at the National Museum of Oriental Art in Buenos Aires (2010-11). Her publications include Asia through Art and Anthropology: Cultural Translation Across Borders (edited with Morgan Perkins and Olivier Krischer, Bloomsbury Academic 2013; the joint winner of the Best Anthology Prize for 2014 by Art Association of Australia & New Zealand) and “Memory in the debris: The 3/11 Great East Japan earthquake and tsunami” in Anthropology Today (2012). She is also affiliated with the Institute for Art Anthropology at Tama Art University, Tokyo as a research associate. More information about her projects and publications: https://ubc.academia.edu/FuyubiNakamura