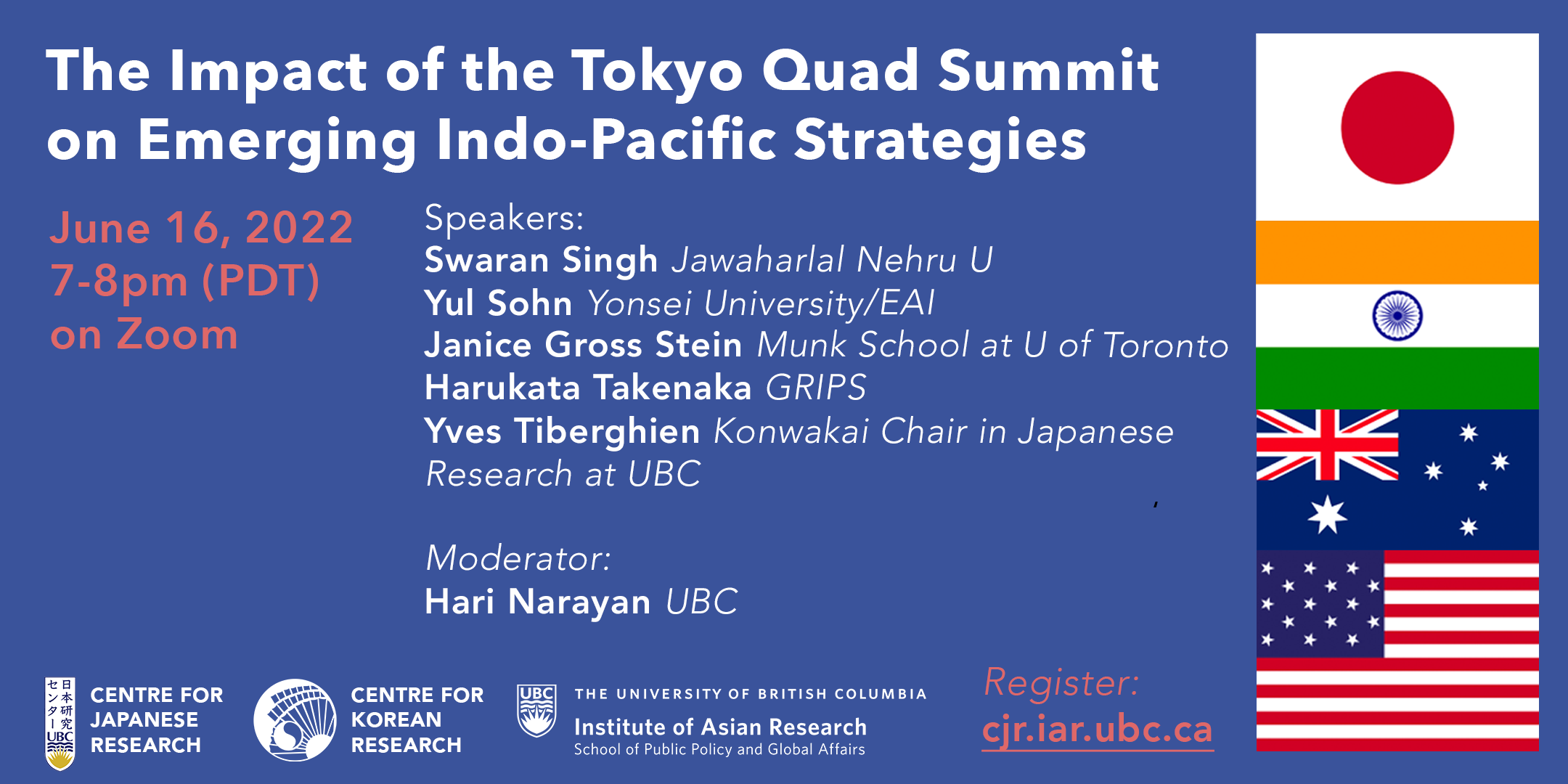 The Youtube Recording of this event is now available here:

On June 16, 2022, at 7pm (PDT), the Centre for Japanese Research will be hosting an important panel discussion on the Tokyo Quad Summit and how it will affect geopolitical strategies in the Indo-Pacific. On May 24th 2022, Japan hosted the fourth Quad (Quadrilateral Security Dialogue) Leaders’ Summit in Tokyo, with Prime Minister Fumio Kishida, President Joe Biden, Indian Prime Minister Narendra Modi, and newly-elected Australian Prime Minister Anthony Albanese. The Quad as a Strategic Security Dialogue between these four countries establishes a security dynamic in the Indo-Pacific region that will compete with the geopolitical interests of certain Indo-Pacific states, such as China. The summit concluded with the four leaders agreeing to their commitment to a “Free and Open Indo-Pacific” to “… resolve to uphold the international rules-based order where countries are free from all forms of military, economic, and political coercion.” This poses a question on the political and geopolitical ramifications the Quad Summit has in the Indo-Pacific and the entire international community.

To address this question, the Konwakai Chair in Japanese Research at the UBC Centre for Japanese research will host an online event conversing with esteemed scholars throughout the world to share their opinions of this Summit.

Register for this event here.

Swaran Singh is a Professor for Diplomacy and Disarmament at Centre for International Politics, Organization and Disarmament (CIPOD), School of International Studies, Jawaharlal Nehru University (New Delhi). He is the President of Association of ASIA Scholars, General Secretary of Indian Association of Asian & Pacific Studies, Guest Professor at Research Institute of Indian Ocean Economies, Yunnan University of Finance and Economics (China) and Advisory Board Member of Atlanta-based Communities Without Borders Inc. (United States). He is also on the Editorial Board of Asian Policy & Politics (Washington DC), Journal of the Indian Ocean Region (Hyderabad), Journal of Indian Ocean Studies (Delhi), and Millennial Asia (Delhi), Suraksha Chintan (Meerut) as also Referee on various academic journals.

Yul Sohn is a Professor of the Graduate School of International Studies (GSIS) at Yonsei University, Seoul, Korea. He also serves the President of the East Asia Institute, a foreign policy think-tank in South Korea. He is the President of the Korean Association for International Studies. Sohn has written extensively on Japanese and East Asian political economy, East Asian international relations, and public diplomacy. His most recent publications include Japan and Asia’s Contested Order (2018, coedited with T. J. Pempel) and Understanding Public Diplomacy in East Asia (2016, coedited with Jan Melissen) both from Palgrave MacMillan. Sohn has written Asian Survey’s yearend articles for South Korea in 2012 and 2013, respectively.

Janice Gross Stein is is the Belzberg Professor of Conflict Management in the Department of Political Science and the Founding Director of the Munk School of Global Affairs at the University of Toronto. She is a Fellow of the Royal Society of Canada and an Honorary Foreign Member of the American Academy of Arts and Sciences. She is the co-author, with Eugene Lang, of the prize-winning work, The Unexpected War: Canada in Kandahar, and her most recent book is Diplomacy in the Digital Age. Professor Stein was the Massey Lecturer in 2001, and a Trudeau Fellow. She was awarded the Molson Prize by the Canada Council for an outstanding contribution by a social scientist to public debate, and has received an Honorary Doctorate of Laws from the University of Alberta, the University of Cape Breton, McMaster University, and the Hebrew University of Jerusalem. She is a member of the Order of Canada and the Order of Ontario.

Haruka Takenaka is the Professor of Political Science at the National Graduate Institute for Policy Studies (GRIPS), Tokyo, Japan, who specializes in Comparative Politics, Japanese Politics, and International Political Economy. His current research focuses are on the changes in Japanese Parliamentary System and the Leadership of Prime Minister and Political Institutions. He also focuses on the research on the history democratization in Pre-war Japan. He has also worked at the Headquarters for the Reorganization of the Government as well as the Ministry of Finance at the GOJ. He is the author of Failed Democratization in Prewar Japan: Breakdown of a Hybrid Regime

Yves Tiberghien (Ph.D. Stanford University, 2002; Harvard Academy Scholar 2006; Fulbright Scholar 1996) is a Professor of Political Science, Director Emeritus of the Institute of Asian Research, and Co-Director of the Center for Japanese Research at the University of British Columbia (UBC) in Vancouver, Canada. Yves is Distinguished Fellow at the Asia-Pacific Foundation of Canada and a Senior Fellow at the University of Alberta’s China Institute. He is an International Steering Committee Member at Pacific Trade and Development Conference (PAFTAD). He is a visiting professor at Tokyo University and at Sciences Po Paris. He co-founded the Vision 20 initiative in 2015. His research specializes in comparative political economy and global economic and environmental governance, with an empirical focus on Japan, China, Korea, and Europe. His latest book is The East Asian Covid-19 Paradox (2021, Element Series, Cambridge University Press).

Hari Narayan is a graduate student in his final year at UBC’s School of Public Policy and Global Affairs and a part of the Konwakai Chair in Japanese Research team. A former journalist from India, he is interested in the geopolitics of the Indo-Pacific region, researching issues on the Indo-Pacific Strategy and the QUAD from the perspective of India.