Diplomacy from the Ground Up

Light refreshments will be served.

Mr. Caron’s presentation will provide his thoughts on the evolution of Canadian relations and policy vis-a-vis Asia, and his role as Ambassador to Japan. 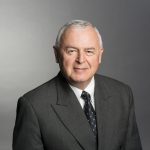 Joseph Caron served in the Canadian Foreign Service for almost four decades, specializing in Canada-Asia relations and G-7/APEC economic summitry. During his last decade in Government, he was posted as Canada’s Ambassador to the People’s Republic of China (2001-2005), Ambassador to Japan (2005-2008) and High Commissioner to the Republic of India (2008-2010). He is a Fellow and Honorary Professor at UBC’s Institute of Asian Research and Senior Fellow at the Asia Pacific Foundation.